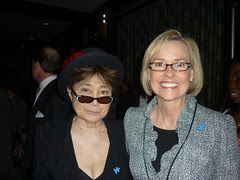 So to catch up on the week's events, Dr. Oz had a show on autism causation. Alison Singer et. al. spouted the party line that we don't know what causes autism but we know it is not vaccines, and the audience basically told them to go to hell. (Like I keep saying, NOT WORKING) Autism Speaks was invited to participate but refused. And of course they did. They can't withstand direct questioning from the public any more than Kathleen Sibelius or Julie Gerberding or Thomas Insel or any of the others trying to continue to get away with posing as earnest people trying to find the true causes of autism.

Instead, Dr. Geri Dawson (who is paid in the mid six figure range despite the fact that she has not cured any more autism than I have) posted on the AS blog on why they refused to show up.  Because they don't want to talk about vaccines.  She declares that:

It's Time to Change the Conversation

Which I find HILARIOUS as Autism Speaks has NEVER been a part of the vaccine/autism causation conversation!

It is as if I, a straight waspy Maine autism mom, blogged to the transsexual community in San Francisco that they need to change the conversation on whether or not one is born psychologically male or female and what should be done when sexual identity crises arise. I say "they" because this is their conversation, not mine, as I have never entered into this dialog and even had to look up the spelling of the word "transsexual."  (Two 'ss', who knew?)

As someone who has been neck deep in the vaccine causation discussion for more than five years, I can tell you I would have LOVED to have this discussion with them. Or even show up somewhere to hear them have it with anyone on our side of the issue. But other than a few press releases vaguely denying vaccine induced autism and two or three questions that rogue mothers managed to sneak in at random events... natch on the vaccine/autism causation discussion from AS. (Although I do hear that it is hotly debated in the hallways at AS now... so was this blog by Dawson meant for us or was it just a passive aggressive externalized internal memo? Trying to keep the troops from turning the AS lobby into Tahrir Square?)

So... all you boys who want to be girls? I have decided that you can't talk about that any more. Turn in your giant wigs and size 11 heels. And I will go ahead and only blog about ABA (even though we didn't do ABA) and we should just go ahead and take down Age of Autism. Retract their book, and Vaccine Epidemic, and Callous Disregard, and Evidence of Harm. Close up shop at NAA and TACA and SafeMinds and ARI. Oh... and someone call Chicago and tell them Autism One, (which Ed Arranga and Generation Rescue managed to make FREE this year to parents trying to ACTUALLY heal their kids) is cancelled.

Why? Because Dr. Geri says so. We are not allowed to talk about vaccines any more. (My suspicion is that AS's real clients, big corporate donors whose names shall not be spoken and who have a vested interest in keeping a lid on the environmental causes of autism to keep their business a rollin', have put the screws to AS to try to get the peasants to quiet down... but since Dawson has no street cred, well... NOT WORKING.)

But now that I think about it, we better do what she says, because if we don't, she will take away all those imperative family services that they give to our kids... oh wait... we don't get help for our families from them. But they will stop doing all that research that has helped our kids get better... oh... forgot... their research has not led to anything to help our kids health. I know... if we don't do what Geri says, then she will stop letting us walk around town with our friends to raise money for her Park Avenue office space and gala fundraising events! She won't let us let her use our kids stories of hardship to raise money for her to pay for her other fundraising events! Oh the dilemma!

On second thought... we will go ahead and continue having the conversation; from now on we will do it without AS, which means absolutely nothing has changed. Except that AS is saying out loud what they have actually been doing for years. Ignoring the 800lb gorilla in the room.

So I am going to go ahead and comment here,just in case a RoboFriend is interested!
Go Ginger! Team Ginger!

I want to be you when I grow up. Your ability to articulate your thoughts in a constructive way is awesome to behold.

I don't have an autistic child. But I believe in my very soul my oldest son (10yrs old) would have full blown autism if I hadn't felt an overwhelming urge to stop vaccinating him at his 6 month check. So I'm fascinated and humbled to see the children and families that have been harmed by the very things that are supposedly designed to protect them.

Thank you for giving us all a voice and helping to save the future generations from this same struggle.

Closing up shop at AoA would be just as well. They've basically become an extension of Autism Speaks. They've learned to raise lots of money tho-- I guess that's the main thing.

I remember when I phoned ARI about seventeen years ago, and reached Dr. Rimland and spoke on the phone with him. Tried calling them a couple of weeks back. Only got their message machine, where I left a message. My call was never returned.

What a great article with a perfect analogy! I hope it makes it to Huff Post.

The crying shame is that Autism Speaks has done such a wonderful job at marketing the "product" of autism to America. But then would they be able to do it without the millions in corporate sponsorship? Of course not.

So how do we market our message without money, serious money? How do we set up a program to help fund the families in need? Lobby congress, fund research, enact laws to protect our kids, how do we do it?

We will someday have to take to the streets, 500 people chained to the front gates of Merck, a hundred or so showing up at school board meetings to support one family, hand out fliers outside pediatrician offices as if they were abortion clinics, pictures of before and after. We will have to show up at court hearings, restaurants that make it uncomfortable for our children, airports, and come out by the thousand when a child with autism goes missing. We do all this and we will be speaking for autism, not AS or the CDC or HHS.

Great post! And thanks for posting that video too! I tried and they won't put my comment through. Here's another good video too...
http://www.youtube.com/watch?v=GxM6MVxoUt8&feature=related

Robin, I thought about just ignoring you but I'm in a snarky mood today and I've had it with your whining "attacks" on AoA. Here's how AoA REALLY feels about AutismSpeaks...http://www.ageofautism.com/2011/02/adventures-in-autism-on-autism-speaks-vaccine-causation-white-flag.html?utm_source=feedburner&utm_medium=feed&utm_campaign=Feed%3A+ageofautism+%28AGE+OF+AUTISM%29&utm_content=FaceBook
I used to think you had something to say. You and I talked on the phone and I thought, ok, a bit strange but everyone's got their "thing". NOW, I think you're delusional and it's no wonder AoA wouldn't let your hair brained comments on their site. OF COURSE Katie is very much a part of her very well to do family. THEY ARE HER FAMILY regardless of anything else. So you expect Katie to turn her back on her entire family? WHO are you to expect her too? NO ONE of any substance in her life.
Second, Kim has never "sold out". Any solid proof of her "selling out"?
Ginger, you not only ROCK you are a god!!!

Hi I used to give money to NAAR, I think they changed their name to Autism Speaks. Anyway when I read the RFK article in 2005 I wrote begging them to warn people - they weren't interested. I had a series of emails between myself Peter Bell where I tried to convince him = hearing that he had a child on the spectrum -- You could knocked me over with a feather when he wrote back saying that he did NOT vacinacte his younger child. Then I realized these people are just evil.

Ginger WOWZER you hit the nail (AS) on the head. Love reading your stuff. It is exceptional!

and as for Robin you are off your rocker about AOA.

I attended the recent CDC/AS workshop and was part of the public comment. I said the thing that drove me to that meeting was that nothing is different for a family that gets a diagnosis today than it was for my family 7 years ago. And since AS has been in existence since then, I find that highly unacceptable. Peter Bell came up to me afterward and said thank you for saying what I said about vaccines, "it needed to be said, but they are just not ready to hear it"...and then he informed me that AS DOES have something for parents that didn't exist when my son was diagnosed...their online First 100 Days kit. That's what they've got for us after 7 years and 100s of millions...an online First 100 Days Kit.

Unknown said...
This comment has been removed by the author.
10:05 PM

wooooooooooo hoooooooooo Ginger
You are one amazing woman!
Thanks for all you do

It's just that it’s been very hard -- to have begged and pleaded with someone who I'd trusted to PLEASE don't do this to me, please don't censor me for the sake of working with Autism Speaks. Not after all of the censorship that I’ve experienced in recent years. And to have had my words fall on deaf ears. I suppose I should accept that people will try to work with Autism Speaks. That people have tried to work with them. They're huge, after all. And if people realize -- granted later than I think they should've but at least finally -- that that ship is apparently way the heck too big to ever turn around, then I guess I should be happy when and if that realization finally occurs. And I suppose I should let bygones be bygones.

Lord knows I’ve been accused of being delusional before. (not to mention strange..) It’s just that it’s usually been by the people who support the vaccine makers, and it hurts more when it’s from the people who don’t. And lord knows I’ve had my own issues with family. But family (at least so far) has come out on top of it all. So I don’t begrudge Katie.

But I will never trust Autism Speaks and I’ll always be hard pressed to trust anyone who does trust them. Call me delusional or any names you like but you aren’t likely to change my mind about that.

Ah, yes... the latest spin from Geri "Any Way The Wind Blows" Dawson. She knows which side her bread is buttered on.