I Am Blocked From Facebook for Seven Days for Posting St. Augustine's Correct Theology 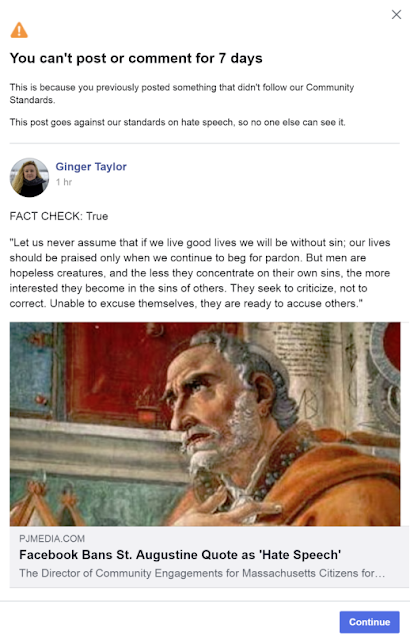 Well it turns out the FB attack on Christianity is real, as it has declared the foundational biblical doctrine of Original Sin is "hate speech."

When PJ media wrote that Facebook was blocking St. Augustine's discussion of the fallen nature of Man, which necessitated the self-sacrifice and resurrection of Christ for the spiritual salvation of humans, I didn't take it seriously.  I thought that they had done something silly in just one case, but it turns out the bloggers in their jammies knew what they were talking about.

Today, for posting the article and the quote, I have been blocked from posting on Facebook, or using messenger for 7 days.

1.  The nature of humans is fallen.  All men have fallen short of the glory of God.  There is no one who is good, no not one, but Christ Himself.

2.  God so loved us anyway, that he became flesh, walked among us as The Christ, lived a perfect life, and gave his life to substitute His undeserved death for our deserved deaths.

Facebook has decided Step 1 of the Gospel is "Hate Speech."  It has therefore invalidated the entire Gospel.

Jeremiah 17:9 is brutal in its clarity and description of the human heart:
"The heart is deceitful above all things, and desperately wicked: who can know it?"

And all the way back in the book of Numbers 5:5-7, we were taught to repent of our sin:


"Then the Lord spoke to Moses, saying, “Speak to the sons of Israel, ‘When a man or woman commits any of the sins of mankind, acting unfaithfully against the Lord, and that person is guilty, then he shall confess his sins which he has committed, and he shall make restitution in full for his wrong and add to it one-fifth of it, and give it to him whom he has wronged. "

This is the way we taught it to our children.  Hey kids, when you do something wrong, either intentional wrong that you knew was wrong when you were doing it, or absent minded wrong that you realized was wrong after you did it, or wrong that someone has confronted you on that you know you are guilty of...

But all of that is predicated on, "WHEN you do something wrong..."

Because ALL MORTALS DO WRONG THINGS.

Search my comments over the years and you will find that I often say that there are two kinds of people in the world, Sinners and repentant sinners.  Everyone is broken, and some of those broken people who do broken things try to clean up what they broke and not break things any more.

But no one can completely, because people are broken, and will continue to break things.


"Let us never assume that if we live good lives we will be without sin; our lives should be praised only when we continue to beg for pardon. But men are hopeless creatures, and the less they concentrate on their own sins, the more interested they become in the sins of others. They seek to criticize, not to correct. Unable to excuse themselves, they are ready to accuse others."

No.  No I am not.  I have met me.  I know me way better than you know me.  I am shocked at the terribleness that I have been capable of.  But because I love God, live in gratitude for his grace, and want to obey and become more like him, I have decided to live a life of repentance.  There are two kinds of people in this world, sinners and repentant sinners.

I am either the former or the latter, but again... the entire gospel is predicated on the fact that we are all sinners.

As Paul reminds us in Romans 3:

"9 What shall we conclude then? Do we have any advantage? Not at all! For we have already made the charge that Jews and Gentiles alike are all under the power of sin. 10 As it is written:

19 Now we know that whatever the law says, it says to those who are under the law, so that every mouth may be silenced and the whole world held accountable to God. 20 Therefore no one will be declared righteous in God’s sight by the works of the law; rather, through the law we become conscious of our sin."

Have I made the case yet that Christianity is predicated on the fact that the nature of humans is "human nature?"

Paul spends Romans 7 contemplating his own sin spiral that he cannot escape, and then Romans 8 REJOICING that God loves him and saved him anyway!  If you know anything about me, and my relationship with God, you know how important these two chapters are to me.


7:24 "Wretched man that I am! Who will deliver me from this body of death? 25 Thanks be to God through Jesus Christ our Lord! So then, I myself serve the law of God with my mind, but with my flesh I serve the law of sin.
8:1 There is therefore now no condemnation for those who are in Christ Jesus. 2 For the law of the Spirit of life has set you free in Christ Jesus from the law of sin and death. 3 For God has done what the law, weakened by the flesh, could not do. By sending his own Son in the likeness of sinful flesh and for sin, he condemned sin in the flesh, 4 in order that the righteous requirement of the law might be fulfilled in us, who walk not according to the flesh but according to the Spirit."

And then he calls me a co-heir with Christ!


"12 So then, brothers,[e] we are debtors, not to the flesh, to live according to the flesh. 13 For if you live according to the flesh you will die, but if by the Spirit you put to death the deeds of the body, you will live. 14 For all who are led by the Spirit of God are sons of God. 15 For you did not receive the spirit of slavery to fall back into fear, but you have received the Spirit of adoption as sons, by whom we cry, “Abba! Father!” 16 The Spirit himself bears witness with our spirit that we are children of God, 17 and if children, then heirs—heirs of God and fellow heirs with Christ, provided we suffer with him in order that we may also be glorified with him."

Which is a big deal given the fact that I am broken and can't stop breaking things.  Which I am and I do, because that is the nature of a human.  Which I am.

All I can do is continue to try to clean up after myself and do better next time, and depend on the free gift of salvation that God gave me.

So FB has declared the Christian view of human nature verboten on their platform.  Will they block people for posting any of the scripture that I have posted here?  ANY scripture on our fallen nature, or need for forgiveness, or any scripture at all?

Where does the attack on Christian theology end if it starts with doctrine of the sinful nature of man?

This week I will spend my time exploring and developing my other social media profiles.

THIS JUST IN: FB repents of sin, commutes sentence to time served after I posted this blog.

UPDATE 7/18: And the Facebook persecution of those who quote St. Augustine continues! Yesterday  my friend Yvette shared my post, and the Augustine quote, adding, "Being accountable for your own faults is now hate speech!!!!" 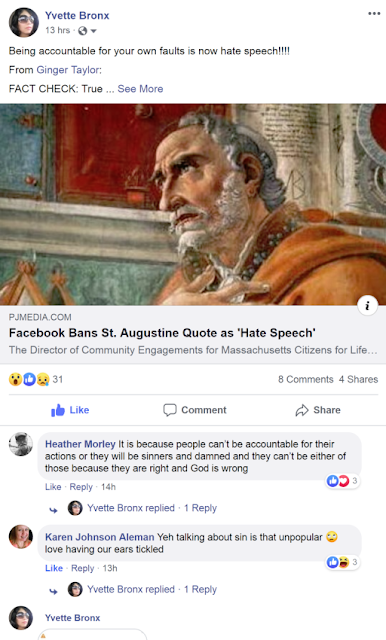 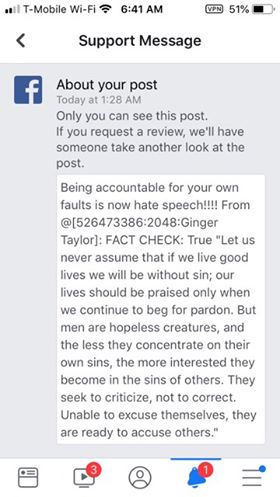 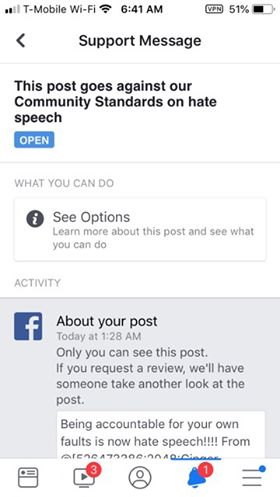