"Anti-vaxxer" is Used as a Bigoted Epithet and a Smear, Why Are You Using It? 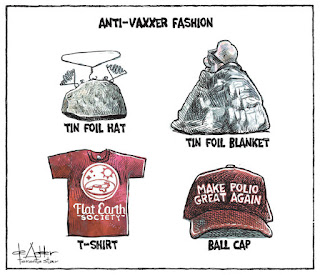 What do you call the Princeton/Harvard educated father of a disabled daughter who works to improve vaccine safety science and policy?  An "anti-vaxxer" who deserves to be hung.

I have written several vaccine safety reform bills, one of which that resulted in adding this page (https://www.maine.gov/dhhs/mecdc/infectious-disease/immunization/vaccine-safety.shtml) to the Maine.gov web site, to make sure that the state officially recognized and informed the public that the Vaccine Injury Compensation Program Exists.

So naturally by working to assure that the state, and its medical providers, know about federal vaccine safety and injury programs, I am opposed to vaccination in any and all forms, and should be tagged as an enemy of the people.

Someone last year said on Twitter that the bigoted moniker, "anti-vaxxer" was akin to calling someone the "N" word.  He was roundly attacked for the comparison, and with some good reason, as his idea was not yet thought through.  He was not quite right, but he was in the ballpark.  The hatred of anyone critical of any part of the vaccine program is not based on who they were at conception, as the "N" word is.

The term "anti-vaxxer" is a bigoted epithet.  Some bigoted smears are based on racism, hatred of someone for who they were born to be, and some are based on choices that people have made.  The "anti-vaxxer" term falls into the latter category.

There is a term that border patrol officers made up in the 1950s for those coming into the US illegally from Mexico, that described their appearance after swimming across the Rio Grande.  I don't need to write it, we know what it is, and it is cruel and devaluing.

There is a term that soldiers use when fighting in the middle east for those who choose to specific headwear.  I don't need to write it, we know what it is, and it is cruel and devaluing.

There are many terms that individuals use to describe those of other religions to extend cruelty to them, and to devalue them.  Often to justify their wholesale murder and genocide. They are too myriad for me to write here.  (And frankly I don't want to write any of these dark designations.)

These are terms that serve the purpose of turning those they find undesirable into "other."  To dehumanize them so that treating them poorly is made more palatable.

And it is done every day in the press in the US to those who simply say, "I vaccinated my child and they had a reaction."

Here is the current search for the use of the term in mainstream media headlines:

Newsweek|3 days ago
A new Russian ad campaign mockingly suggested that parents opposed to vaccinations are afraid to give the potentially life-saving inoculations to their children out of concern they could be ...

MSN News|6 days ago
A controversial anti-vaxxer NRL WAG is facing more public backlash from health clinicians over the online wellness and lifestyle programs she promotes on social media.

MSN News|5 days ago
Her views must be condemned when children are dying of the disease writes Peter Williams.

These Parents Are Going to War With Anti-Vaxxers on Facebook

Vice|4 days ago
A new brand of pro-vaccination parents are heading to Facebook to do battle with anti-vaxx ideas at their source. Anti-vaxx activists have used Facebook and other social platforms for years ...

It is used without compunction by most mainstream outlets, and the message is clear... those they are talking about are stupid enough to think that vaccines are akin to vampire bites, have no qualifications to speak on vaccines, are Nazis, and it is ok to harass them, remove their rights and eject them and their children from school, camp, college, the medical profession, religious observances and public gatherings.

Do Newsweek, MSN or Vice us these kinds of terms when discussing South American immigration, or middle eastern enemies, or Jews, or Catholics, or Muslims or... anyone?

Why in the age of "self-identification" is anyone in any press outlet able to do this to anyone?

Even for those who are just picking up the term from other articles, it is lazy writing at best.

Why in the WORLD do they get away with doing it to parents of vaccine injured children, or those whose children died at the hands of the liability-free vaccine program that they trusted?

So next time you are reading an article on "anti-vaxxers" slide in one of those old, hateful appellations that would be anathema to anyone that cares about human beings and see how that sounds in your mind.  Or when you are reading an article on immigration, pick a bigoted phrase to replace the words "migrant" that no actual bigot in polite society could get away with using any longer, and see how hard and ugly that sounds in your head.

That is how hard the term "anti-vaxxer" sounds in my head when I read it as it is used on people like Sheila Ealey for showing the world her beautiful boy who crashed after his MMR and his struggles in his daily life.

Why do some of us use that horrid, demeaning term?  If that is your preferred term, that is certainly your choice, but it is not my choice to spend 15 years trying to make the vaccine program safer to be diminished as, "anti-vaxx."