The Autism Epidemic and The Broken Window Fallacy

At the behest of a good friend, I am currently reading "Economics in One Lesson" by Henry Hazlitt (because who wants to spend that much time in lessons in economics) and I am struck by the parallels between bad economic policy and bad medical policy.  I firmly believe that once you see corruption in a system that is close to you, that you are a part of, then it become difficult not to see it in all the systems you come in contact with, if, of course, you are willing to deal with so much harsh reality all at once.  Such has been my experience in... well every system I see since having my rose colored glasses ripped off after Chandler regressed.

I am also struck at how parsimonious and cogent Hazlitt is in his lesson in economics.  Only made more impressive as he wrote the lesson in 1946, yet so applicable is it that, but for the lofty language, one would think it was written yesterday.

1.  That bad economic policy stems from pressing agendas that benefit one group, but do not consider the outcomes for other groups (usually pushed through by moneyed/powerful interests that "will hire the best buyable minds to devote their whole time presenting its case.")

2.  That bad economic policy stems from short term thinking and ignores the long term consequences of such policies.

So at this point you can see where I am going with this, so I won't insult you by a lengthy explanation, but merely say:

2.  "Good news, Dr. Gerberding... measles cases are down.  Sure 18% of children are permanently disabled or delayed, half of children are suffering from autoimmune/chronic illness and more than 1% have this neurological condition called, "Autism" that didn't exist 70 years ago and that we know is caused by vaccines, but hey... less easily treatable measles!!

The point comes shining through... both the economy and the human body are complex systems with mega trillions of working parts, and when we become so arrogant to believe we can understand, control and conquer them with out consequence .. well there are serious consequences to that serious lack of humility and wisdom.

He writes that, "therefore, the whole of economics can be reduced to a single lesson, and that lesson can be reduced to a single sentence. The art of economics consists in looking not merely at the immediate but at the longer effects of any act or policy; it consists in tracing the consequences of that policy not merely for one group but for all groups."

I have never had an economist reduce me to tears before.

But it is when we get to Hazlitt's application of that lesson that it becomes truly difficult for me.  He
shares Frédéric Bastiat's broken window illustration to point out how short sighted economists can be.

A young hoodlum, say, heaves a brick through the window of a baker’s shop. The shopkeeper runs out furious, but the boy is gone. A crowd gathers, and begins to stare with quiet satisfaction at the gaping hole in the window and the shattered glass over the bread and pies. After a while the crowd feels the need for philosophic reflection. And several of its members are almost certain to remind each other or the baker that, after all, the misfortune has its bright side. It will make business for some glazier. As they begin to think of this they elaborate upon it. How much does a new plate glass window cost? Fifty dollars? That will be quite a sum. After all, if windows were never broken, what would happen to the glass business? Then, of course, the thing is endless. The glazier will have $50 more to spend with other merchants, and these in turn will have $50 more to spend with still other merchants, and so ad infinitum. The smashed window will go on providing money and employment in ever-widening circles. The logical conclusion from all this would be, if the crowd drew it, that the little hoodlum who threw the brick, far from being a public menace, was a public benefactor.

Now let us take another look. The crowd is at least right in its first conclusion. This little act of vandalism will in the first instance mean more business for some glazier. The glazier will be no more unhappy to learn of the incident than an undertaker to learn of a death. But the shopkeeper will be out $50 that he was planning to spend for a  new suit. Because he has had to replace a window, he will have to go without the suit (or some equivalent need or luxury). Instead of having a window and $50 he now has merely a window. Or, as he was planning to buy the suit that very afternoon, instead of having both a window and a suit he must be content with the window and no suit.  If we think of him as a part of the community, the community has lost a new suit that might otherwise have come into being, and is just that much poorer.

The glazier’s gain of business, in short, is merely the tailor’s loss of business. No new employment” has been added. The people in the crowd were thinking only of two parties to the ransaction, the baker and the glazier. They had forgotten the potential third party involved, the tailor. They forgot him precisely because he will not now enter the scene. They will see the new window in the next day or two. They will never see the extra suit, precisely because it will never be made. They see only what is immediately visible to the eye.


The "broken window theory" will be immediately recognizable to any Fifth Element fans, as it is used by Gary Oldman's villain character, "Zorg," to justify his being in league with an entity that wants to destroy the planet, to Sir Ian Holm's priestly character, Father Vito Cornelius.  This scene contrasts the character and motivations of the two men, showing one to be a heartless (and sociopathic) pragmatist out for his own gain, and the other to be one who cares about the lives of people, even "Loving his enemy," when the evil man's life momentarily falls into his hands.

To subscribers to the broken window theory, war is good, natural disasters are "stimulus", disease is profit and shattered lives are economic opportunities.

The broken window story is hard for me, first, because my son is the young hoodlum who has broken the window.  Several windows in fact.  If you drive by our house, you will note that the windows on either side of our door are broken.  One side held together with duct tape, and the other is boarded up on the bottom.  If you sand in our back yard, you will note that the garage windows are boarded up.  They were casualties of Chandler's 2008/2009 "I apparently love the cool sound of breaking glass" phase.  We fixed the window panes in the basement, my bedroom and our office, because... well... don't wanna look completely white trash and all, but left the ones that were most vulnerable to re-assault as they were, vowing to fix them once he got past the fixation.  I suppose now it would be safe to fix them this summer.  But then again what autism family has extra money to fix broken windows?

But I will never forget the panic of chasing him from room to room as he held a large glass juice bottle and tried to throw it any window he could get close to.  Or the anger at those who did this to him, when I heard a crash and ran into the entry way to see him reach out to grab the large shards left in the window frame and slice his fingers open before I could grab him.  Or the hart failure I experienced the following morning when I was scared shitless awake by the sound Chandler throwing a chunk of metal at a different pane in the same window in the entry, and begging God to let me fly down the stairs to stop him before he opened up an artery.

But the hardest thing about reading the broken window theory is knowing that to many out there, Chandler is the broken window and Dr. Julie Gerberding is the hoodlum turned "public benefactor."  That our children are an economic opportunity that has opened up a 137 billion dollar per year industry (that Pharma is rushing to make bank off of with more psych meds).  That Autism Speaks represents that they serve our families, when in truth Bernie Marcus set it up to funnel private and corporate donations back to the CDC and the CDC Foundation to fund CDC research for a condition unrepentantly caused by the CDC.

Need your work on robots financed?  Put the word "autism" in your research grant and your department can be funded for another year.  Don't worry if it silly, or ineffective or doesn't improves the lives of people whose CNS is on fire, all you have to do is, "Think its a good area to explore."  Hell... make your DNA research about autism, and you can get funded for decades with out ever coming up with a treatment or even replaceable results!

This year I talked to a Mother Warrior/Medical Professional who attended a hospital board meeting where the CEO, not considering that it was an open meeting, lamented their low profits to the audience, and opined that what they really needed was a good epidemic.

And of course, the master of doing nothing about autism, the man who has managed to look busy for six years while getting paid to allow the autism rate to double, Thomas Insel. 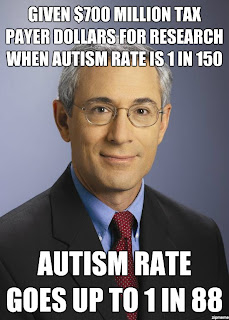 Insel heads the Federal Government's Autism efforts, fully admits that greater than 80% of autism cases are environmental, and yet wasted more than SEVEN HUNDRED MILLION DOLLARS on genetic and non-environmental research.  Can we come to any other conclusion than Insel and Zorg hold the same economic theory and contempt for humanity?

Boy... that $700 million + sure has funded a lot of busy work in the name of servicing those broken windows.  No autism preventions of course.  And no treatments.  We need those windows to keep breaking and stay broken.  Industry and the economy depend on it, right?

But the Grand Prize has to go to the APA, for DSM 5, which will make every person in this country diagnosable with a mental illness and "treatable" via psych meds with horrible and sometimes deadly "side effects."  What could possibly go wrong there?

1.  That bad medical policy stems from pressing agendas that benefit one group, but do not consider the outcomes for other groups (usually pushed through by moneyed/powerful interests that "will hire the best buyable minds to devote their whole time presenting its case.")

2.  That bad medical policy stems from short term thinking and ignores the long term consequences of such policies.

Props to Henry Hazlitt for making bad theory and practice so easy to see.  I highly recommend the quick read.  Free PDF can be found here.
at December 30, 2012 5 comments: