You read that right.  The American Medical Association has published a piece in the Policy Forum entitled:


Should Participation in Vaccine Clinical Trials be Mandated?

I am absolutely apoplectic.

The article, written by Suzanne Sheehy and Joel Meyer begins its argument for forced participation in vaccine trials with a quote from Highly Esteemed and Eminent Physician Ethically Challenged College Dropout Bill Gates.  Because he is truly who you should be going to for medical advice.  Cause... you know... he's rich.

So on the basis of this non doctor's, non-medical opinion (we do know that he owns a vaccine company, right), with no proof of the validity of this statement necessary mind you (because after all, "few would argue with him" and consensus equals truth) we are not only now going to vaccinate everyone, we are going to force people into vaccine trials.

And the medical establishment is completely baffled why people don't trust them any more and won't take their vaccine advice?

If I just stopped here, the fact that they just published this suggestion, should be enough to perhaps get mainstream med to ask themselves whether or not they really have jumped the shark on vaccine policy.  But then again, that should have happened a long time ago.  But apparently not yet.  Let's go on to the arguments they make including the ideas that:

And I just want to give you this whole quote, so you really see clearly that when we say that our children have been drafted into their war on communicable disease, it is not really an analogy as much as it is... well... fact:

"In both conscription and obligatory trial participation, individuals have little or no choice regarding involvement and face inherent risks over which they have no control, all for the greater good of society."

In his chapter in our book, Vaccine Epidemic: How Corporate Greed, Biased Science, and Coercive Government Threaten Our Human Rights, Our Health, and Our Children, Allen Tate makes the point that if one is going to make a greater good argument (that one unsavory thing must be undertaken to get something more important for more people) one must first ACTUALLY PROVE THAT SUCH A THING WILL BRING ABOUT A GREATER GOOD.   He then evaluates the greater good argument made for the current vaccine program (which does not include forced vaccine trial participation) and finds that it does not even meet the standard of a "greater good".

But no problem with that here for Sheehy and Meyer, because as they point out, it is vaccine maker Bill Gates' opinion (who is very rich btw), and few would argue with him... so... it must be the best thing for everyone.

It is at this point that I have to offer Leslie Manookin high praise for so aptly naming her vaccine documentary, "The Greater Good".  Let's pause here for a moment to see what this "greater good" program is doing to the vulnerable in our society:


And that is from APPROVED vaccines.

They truly see us and our children as functionaries in their system.  Medicine does not exist to make you, the individual, better; You, the individual, exist to make Medicine better.  You are theirs to "conscript".  They can draft you into their service as an actual "lab rat."  (And no that is not an exaggeration as the third sentence in this article reads, "The lack of animal models that can reliably predict vaccine efficacy means that development still unavoidably relies on testing of novel vaccines in healthy individuals.")

See?  Not about your and your rights and your health.  Your rights are not even factored into their arguements.  Check this:


"As ever, then, the debate boils down to a consideration of the “greater good” or the “lesser evil.” A key consideration is the risk benefit ratio—risk to the individual volunteer balanced against the benefit to society. "

"As ever..." as in the only thing they are taking into account.  The deciding factor.

Then the article truly falls into Orwellian doublespeak.  They authors acknowledge that forcing people to participate in vaccine trials, will violate respect for peoples rights, violate the Universial Declaration of Human Rights, and destroy trust in the vaccine program.  Their solution?

"A more palatable and realistic option is a policy of “mandated choice.” In this case individuals would be required by law to state in advance their willingness to participate in vaccine trials [15]. The advantage of this system is that it could identify a large cohort of willing volunteers from which participants could be recruited rapidly without jeopardizing individual autonomy. It would encourage an open, noncoercive philosophy for tackling societal challenges without compromising individual freedom or public trust in the health care system."

UP IS DOWN!
BLACK IS WHITE!
WAR IS PEACE!
VIOLENCE IS LOVE!
MANDATE IS CHOICE!!!!!

So the law REQUIRING YOU to say you will participate before hand, then holding you to it later, is choice!  It is not coercive, does not violate your right to informed consent, and will not destroy trust in the vaccine program or in medicine or government in general!

Welcome to 1984!!  The law will require you to commit you to volunteer your body to science!  The law does not even do that now for DEAD PEOPLE!

Then we get to the kernel of the issue.  That people just don't value vaccines enough, so the law must now force them to be valued.  And no such article should go with out a shot at Wakefield and our community:


"But perhaps most importantly, as a society we need to evaluate our perception of vaccination. Any successful vaccine program by its very nature takes a once-feared illness out of the public eye. This means that the benefits of immunization become forgotten while side effects in small numbers of individuals fill the headlines. It is all too easy for sensationalist and unfounded stories such as that claiming a link between the MMR (measles-mumps-rubella) vaccine and autism [16] to instead take root in society’s collective psyche. Ultimately such a crucial public health intervention as vaccine development may become devalued—and only revalued once a drop in vaccination rates leads to resurgence of severe disease."

"But perhaps more importantly..."  Because more important than honoring the human rights of actual humans, is a valuable perception of vaccination.

Seriously... these people can go to hell.  Or just visit Auschwitz, where medical progress was much more important than allowing people to say to NO to forced experimentation.

So to the publishers of this article:

Your product line called "vaccine" is not as valuable as you think it is.  (In business this is called a "bubble".)  People are buying less of it.  You have reached a saturation point.  Time to wake up and smell the informed consent.  The public has been informed... AND THEY DON'T CONSENT!

You will put experimental vaccines into the bodies of my family over my dead body.


And to Sheehy and Meyer: 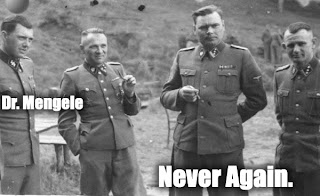 I cannot find words that will express my outrage and contempt for what you have done here.  This is absolutely an abomination to the whole point of medicine, and to logic itself.  I hope that you are despised in your communities for floating a balloon like this.  It is nothing short of evil.

I do take solace in the fact that the logic in this article is such utter bullshit (MANDATED CHOICE... I still can't believe you wrote this with a straight face) that anyone with half a brain will see that you are attempting to bring back the good old days of Doctor Mengele and will flush this article down the toilet where it belongs.

So if this was some sort of ironic "A Modest Proposal" type article to point out that we have gone a bit overboard on the vaccine push, then now is the time to speak up on that.

If not... as I proposed earlier, which might not be as outlandish as it might seem on first consideration... go to hell.
at January 18, 2012

Perfect, they should force ALL DOCTORS, and only doctors, to participate in vaccine clinical trial. Doctors, of course, are the only people on the planet who can really give "informed consent" because the rest of us do not have a medical degree. None of them should be poor or wrongly motivated! Perfect!

id like to draw attention to 2 things: one ich-gcp which is the guidelines for good clinical research and the fact that united states signed the helsinki accords which restricts drug/vaccine trials to those that participate WILLINGLY and also allows participants to withdraw their consent at any point during trial

I think it's tragically ironic that these authors use words like "conscription" to support their argument. The young men (and women) who were marched off to war did so in order to crush the ideologies behind a slew of unspeakable atrocities, including medical experiments performed on unwilling participants.

If the purpose of this article was to "stir the pot", and raise the ire of some "fringe anti-vax" element (creating fodder for the "science" blogs), then I'll oblige, offering some further irony, by re-iterating, unequivocally, Ginger's comment: "over my dead body" (the irony being that medical authorities here can't even touch my dead body, without my express, written, and signed consent, which, by the way, they have).

http://www.memoryclinic.com/news/New_Alzheimer_Vaccine_Programme
Every day in Scottish tabloid newspapers a full page advertisement appears, featuring a georgeous female 'doctor' with a clipboard 'inviting' persons over 50 who may be experiencing memory loss, to take part in these clinical vaccine trials. In addition, us oldies are being urged to take some 10 minute devised 'Alzheimers' test at our local health centres, possibly based on word association. If we 'fail' and let's face it, we all get a bit forgetful as we get older, we get referred to these vaccine trials.
It's all 'dressed up' like some wondrous way of preventing dementia which it ISN'T; so far trials on humans have been disappointing or inconclusive.
There's NOTHING about any possible RISKS advertised. As yet participation in these trials is voluntary, but it's all over hyped and bordering on coercion in some cases.
Personally, I would rather be dead than brain dead. I wish they would just leave us oldies alone, but unfortunately, like vulnerable children, we are seen as actual and potential 'cash cows' for the health and pharmaceutical industries.

Of course, it's also the case that persons with mild or incipient Alzheimers are often incapable of giving properly INFORMED consent to being used as 'guinea pigs' in all kinds of clinical trials. If they so much as nod their heads, this is usually taken as willingness to participate.

What gets me is the same old arguments are being kept alive while the most important question is why have so few, even activists, failed to scream from the roof tops that vaccines are antiquated and obsolete?! Got Bionaid?