So You Saw A Meme Of A Bunny Holding A Sign That Says, “Vaccines Cause Autism,” And You Have Some Questions 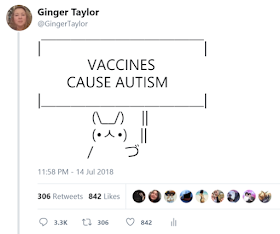 On July 14th of this year, I was scrolling through twitter and saw a graphic of graphic of a bunny holding a sign, and thought, “cute, Imma try that. cut/paste/fill in sign text/ what could it say... umm... "Vaccines Cause Autism.” Tossed up the little throw away tweet and didn't think of it again.


I have been investigating and writing about the relationship between vaccines and autism since 2004, and put out a few thousand tweets on the subject, that get a bit of discussion, but none prepared me for The Great Vaccine Autism Bunny Ratio of 2018.

A few days ago someone RT'd it somewhere, and twitter noticed and it made many of them very unhappy. Hundreds of comments flowed in. I was all, “Wait... THIS is what gets people to pay attention to this subject and engage with us on vaccine risk?!” A decade of documenting fraud, discussing research, sharing government vaccine safety guidelines, sharing videos of official government meetings on vaccine safety, and apparently I should have just tweeted three word bunny memes.

But no worries. Ultimately I am grateful for the bunny as he has brought us together, and you have asked a question that I want to answer. And because I have been unable to keep up with answering the questions, and so many are repeat questions (that I have started cutting and pasting answers to) I decided to give you a one stop destination for answers. Some have not been phrased in the kindest way possible, or given me much of the benefit of the doubt, but they are important questions none the less, so...

While it is not in the initial tweet, so many didn't see it, the second tweet in that thread is a link to a list of papers that I have been compiling over the last 11 years to rebut the false claim that, “There is no evidence of any link between vaccines and autism.” Because the vaccine industry has spent a great deal of time and money cultivating that falsehood, few know that research show multiple links between vaccines and autism. You can read the list here:

Despite decades of parental requests to have these and other lines of inquiry followed up, CDC and NIH have refused to conduct any large scale follow up research on these findings.

There are no studies proving that vaccines don't cause autism. The American Academy of Pediatrics offers 48 papers that fail to find an association between vaccines and autism.

Note that unlike my list which makes clears that it is ONLY offering the evidence that supports the vaccine/autism link, AAP's article title suggests that you are getting ALL the evidence. It then proceeds to give you ONLY the research that fails to find an association between vaccines and autism, while presenting not one of the papers I have offered.

Further note that the AAP's position statement no longer claims that vaccines don't cause autism. They don't claim anything at all, one way or the other. It is a carefully worded statement that talks about research that fails to find an association, but notes that there is other research on vaccine-autism causation that they do not include. I have written a piece on their position here:

The AAP No Longer Claims that Vaccines Don't Cause Autism


3. “So you would rather your child have polio than have autism?”

My initial response is, “What? How did you get from “Vaccines cause autism” to there? I haven't made ANY vaccine recommendations here! Then I remembered that there is a 30 billion dollar per year vaccine industry committed to you making these kinds of leaps.

You seem to have assumed that I am advocating for an end to vaccination. I am not anti-vaccine, and my children are vaccinated. I have written a lengthy discussion of my vaccine position and experience for the Johns Hopkins Journal, Narrative Inquiry in Bioethics.

This is not an either/or proposition. There is risk from both complications from any vaccine, and the diseases that the vaccine is targeting. We must have an honest evaluation of both, and use that information to prevent harm in either case to individual children with DIFFERENT biological risk factors for each.

I do not give advice to others on whether or not to vaccinate, or how to vaccinate, I merely offer resources to families so that they can make their own decisions.

You know that there was no autism epidemic in the 70s and 80s OR epidemics of vaccine targeted diseases, right?  Even for the diseases that we now vaccinate for, but didn't then.

So how is this a choice between fully vaccinating now, or death?  If I survived with a third of the vaccines kids get now, then why must I have to vaccinate my children the way I was vaccinated or watch them die?

And why arn't children dying left and right in Denmark?

Could it be that you have been lied to by the vaccine industry about exactly how badly their products are needed?

THIS IS ABOUT INFORMED CONSENT. The United Nations Universal Declaration on Bioethics and Human Rights asserts that:

The vaccine industry, which includes the vaccine patent holding CDC, has committed fraud in asserting that vaccines are not linked to autism. As demonstrated above, there are many links between vaccines and autism. HHS has admitted this in their response to reporters in the Hannah Poling case, where a girl with autism was paid for her vaccine induced encephalopathy by the government's Vaccine Injury Compensation Program, that:

“Encephalopathy may be accompanied by a medical progression of an array of symptoms including autistic behavior, autism, or seizures.”

Context and lengthy discussions of the admissions that the government has had to make can be found here:

I work toward vaccine safety reform and informed consent. We need a dramatic overhaul of the National Vaccine Plan, including prescreening for genetic and autoimmune risk factors before vaccines are administered, immediate treatment of symptoms arising post vaccination, mandatory education for doctors and health care providers on government and manufacturer vaccine safety guidelines, alternate schedules for high risk cases for reactions, low cost readily available titers testing, and most importantly, the repeal of the 1986 National Childhood Vaccine Injury Act.

There is a rapidly growing research base on autism causation and treatment that health officials are ignoring, that can make vaccination safer, and improve the quality of life for those with autism. Health officials must implement this established science and end the false dichotomy of “fully vaccinate or die” arguments.

We introduce a bill in Maine to mandate training for doctors on manufacturer and federal vaccine injury guidelines. In their testimony, the doctors showed that they didn't even know there were federal guidelines.

Let the doctors themselves tell you how much they were taught about vaccines in medical school:

No. Talking about vaccine risk and vaccine injury does not make one anti-vaccine, and more than talking about the serious side effects that some people have from antibiotics makes one anti-antibiotic.

Here the Department of Heath and Human Services discusses many of the serious adverse reactions some have to vaccines, including death. This does not make HHS anti-vaccine.

The US Vaccine Injury Compensation Program Table of Injuries

7. “Did you know that this theory was caused by ONE dude in I believe Europe who made this claim with no scientific evidence. And to this day there is no evidenced them being linked?”

No, The Theory of Vaccine Induced Autism Did Not Begin With Andrew Wakefield.

The first paper to link the two was the first paper on autism, by Leo Kanner in 1943. The idea was discussed for decades, to the point that in 1991 the Institute of Medicine was including it in their reports on vaccine safety funded by the National Institutes of Health, published by the National Academy of Sciences and edited by none other than Harvard's Harvey Fineberg... seven years before the Wakefield paper.

And again, as shown above, there are now more than a hundred papers discussing the link. Yet the public has been sold the lie that there is just ONE retracted paper by this ONE guy who came up with the whole thing that has been “debunked.” Details on the 75 year continuous history of vaccine-autism discussion in the medical literature here:

No, The Theory of Vaccine Induced Autism Did Not Begin With Andrew Wakefield.

8. "But I know someone who has autism and was never vaccinated, so you fail!"

9. "But I got all the vaccines and am not autistic."

Not everyone who eats a peanut goes into anaphylaxis. Nor does everyone who gets a bee sting or takes penicillin.  But some do.

It is the same with vaccines.  Not everyone will have a vaccine adverse reaction, but some do.

Spend some time reading the adverse reactions of each vaccine, and what contraindications each shot has, that can help predict who will have a bad reaction ahead of time.

The Institute for Vaccine Safety, the Johns Hopkins Bloomberg School of Public Health,
Package Inserts and Manufacturers for some US Licensed Vaccines and Immunoglobulins.

This is a very, very good question. Kudos. I wish I had asked it before my kids were vaccinated.

In 1986, Congress passed the National Childhood Vaccine Injury Act that was eventually interpreted by the Supreme Court, which barred those injured by vaccines, or families of loved ones killed by vaccines, to file lawsuits against pharmaceutical companies that made the dangerous vaccines.

At the same time, Congress declared all FDA approved vaccines, "Unavoidably Unsafe" which means it cannot be made safe for it's intended use.

Then Pharma started a campaign to declare that "Vaccines Are Safe," and to mandate them for first school children, then medical professionals, then those dependant on social services, and soon for everyone. Based on the claim that "vaccines are safe" even though they are "unavoidably unsafe."

You think that this would be an easy law suit to win, but again, no family has be able to get into a civil court and have a jury hear any vaccine injury case in more than 30 years. It is a mess.

So to those who are vaccinating. Buyer Beware. Do your homework first. Thousands of families like ours have learned the hard way. Once you have a vaccine injury, you are on your own.


I have been compiling this list for 11 years, it started with 18 papers.  Every time I add a new paper ScribD changes the link.  You are just seeing copies of the old link. The current list in 151. I already have more to add, but have not done so yet, so you will likely come across higher numbers, and the science behind vaccine autism causation is growing rapidly.  By contrast, there has not been a paper that failed to find an association between vaccines and autism since 2015 according to the American Academy of Pediatrics.

As a Calvinist, I have no rebuttal to offer you.

Your contempt has been noted. Thank you for your input.

I am still grateful that the Vaccine Autism Bunny and his ratio has brought us together. I know that this hit you the hard way, but I still hope you are able to glean a little something from this discussion, even if it is only that it is not as straight forward a matter as you initially thought it was. 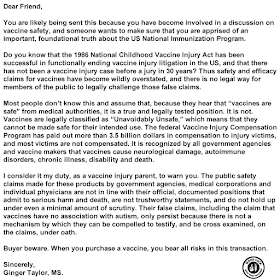