A student accused of spilling mercury at Cedar Springs High School is now being charged with a felony.

On May 11, authorities say 18-year-old Ryan Gorter was caught playing with a dime-sized amount of mercury in class. That prompted school officials to shut down the school for two days while crews cleaned up. The cleanup cost the district more than $40,000.

Now Gorter faces charges of malicious destruction of property, which carries up to ten years in prison, as well as unlawful possession of a harmful device. He has been released on bond.

Or is it safe?

"Our review revealed no evidence of harm caused by doses of thimerosal in vaccines..." - The FDA 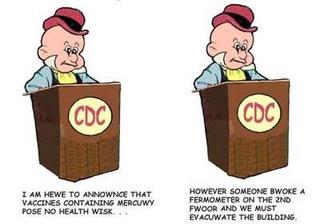