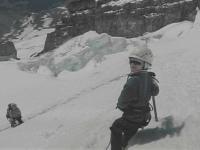 Aidan Gold of Bothell, Washington is already reaching for the stars and never was he closer to them than when he summited Mount Rainier. His parents have the pictures to prove it and others on Rainier were shocked to pass this pint size climber.

Warren Gold, Aidan's father, says, "Everyone would stop and wait and watch. Part of it was curiosity and part of it people were just concerned about him."

Aidan says no need to worry. He's a veteran who's climbed many a mountain. His parents are avid climbers and early on Aidan started following in their footsteps quite literally.

"I think I have the focus," Aidan says.

That focus comes from a type of autism called Asperger's Syndrome.

"What seems to come with this is an intense ability to focus on things the child is interested in,” says Warren.

It allows Aidan do amazing tasks, like create elaborate origami and climb 14,000 peaks to the awe of others.

His parents admit they've gotten questions about safety. "To be honest, I think it's more dangerous to drive on our freeways. In the mountains we can control our risks to a high degree," Warren says.

What is undeniable is this young boy's ability to take his disability and make
it into an advantage.

"I don't think we really realized what a blessing it really was," says Warren

The Golds say they have found no official record of who is the youngest
to climb Mount Rainier but they've been told that Aidan is not the first 7-year-
old to reach the peak.
at July 28, 2005

That is a great story! I think often times people underestimate the ability of children with disabilities.

Thank you for sharing this, I enjoyed reading it!
MitoMom

read about a one armed climber who climbed all the highest peaks except one. read this story in Innsbruk.
your son is truely a plus for special ed teachers such as myself.
all my autistic students have unbelievable strengths,in various areas.i am always humbled how these parents dedicate their entire lives to their child.

I was very pleased to see this heart-warming story. My son is 18 years old and has Aspergers Syndrome. He is a National Merit Commended Scholar and in two days, we are having his Eagle Scout ceremony.