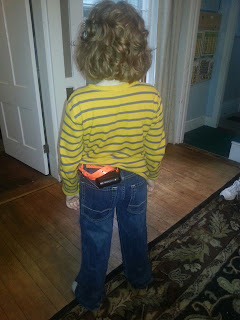 Two weeks ago I attended a festival, and decided to take my boys there and camp out.  For a week.

"Camping for a week in the mountains with a child with autism... are you mad?"  You must be thinking.

Yeah.  I guess.  But we stopped locking our house from the inside a year ago, and I have let him and his brother walk two blocks to the natural health food store alone (we live in a small town in Maine, so not exactly the biggest danger zone.)

So when I decided to take the boys, I put a shout out to local friends for someone to loan me a tracker, but no one had one, and I didn't have time to order one, so I had to buy one local.  The best thing I could find was a hunting dog tracker at LL Bean.  The Garmin Astro.

When I started looking at it, I was all... "ummm this is kinda great for what we are doing"... It is to track dogs in the woods.

It ended up being my only option... and $625 bucks... but I figured I would happily pay that much to get Chandler back if he got lost in the woods... so we snapped it up, threw nine thousand lbs of our friends camping equipment into the car and drove north to try to figure out how the heck to do this "camping" that so many speak of. 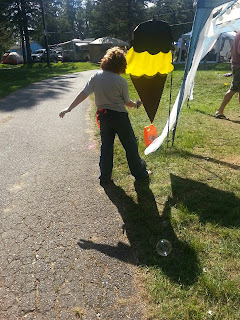 I was sure Chandler would not wander off.  But he did.  I was in a lecture, listening to Milton Freidman's son discuss his ideas on how a completely anarchist society would function, and moved chairs to see better.  I told Web, but not Chandler, and he went looking for me, out side of the pavilion.

So... actually it was my fault.

By the time Web noticed (he was playing Minecraft) and told me, I whipped out the tracker and located him... but the super awesome security staff, who I had already briefed Chandler on, had already found him and was bringing him back.  He was walking around asking, "Have you seen my Mom?"

Thrilled the tracker worked, and realizing that he actually was doing what any normal kid would do when they could not find their mom, I though... "perhaps I have under estimated the boy."  So I decided to lengthen the leash a bit, as it were.

We had been there for three days, and knew the place well.  So we spent the rest of the day testing out the electronic leash.  I gave the boys tasks to do, (go to the Juice Caboose and buy organic smoothies, then to the bathroom, then back to the tent and you guys can play video games.)  Then I would wait for them to get out of sight and track them with the Astro.

And they were great!

Families had been playing "Humans v. Zombies" all week, where they divide up, chase each other all over the camp grounds, and the last human alive wins.  So I decided to let them play while I went to another lecture.  I watched them run around the camp (could even tell when they got into skirmishes with zombies, because their path would go all zig zag.  After an hour, Chandler got hot and quit... a HUGE win for autism world!  He got to play like a normal kid until he felt like quitting!

So when we got home, Dad took the boys out with the tracker and mapped the place we go in town.  Natural food store, Library, gelato shop, all within four blocks... so the boys can start going on more adventures together.

Anyway... no it is not a kid tracker, it is a dog tracker... and it funny when he stops somewhere and it tells me that, "Chandler has treed his quarry."  But I kinda love the thing.

And no contract is needed.  Which is also nice.

So today he walks up to me and says, "Mom... put my tracker on... I am going to the store by myself to get stuff to make pizza!"

I love this story... I'm not sure everyone can know what this means to you - but it's just very touching. :) Love it.