So today I heard the one millionth politician say another version of, "The benefits of vaccination outweigh the risks," and got my panties in a huge bunch, repeatedly hammering "DATA PLEASE!!!" into my poor keyboard. And then the politician sitting next to her became the one quintillionth to say a version of, "I just refuse to believe that all the public health professionals and scientists and doctors and nurses in all the land everywhere in perpetuity would be in a conspiracy to....,"and it is just driving me crazy.

So I took a deep breath and I am writing this to respond to those who repeat what they have been told with out critical thought. I will not name them, as they have agreed to meet with and listen to some of our moms (pray that normal reason guides the conversation), but I am writing this response to them as a primer to people who are stuck in the "that conspiracy is not possible" paradigm.

OK... great point. Conspiracies fall apart faster the larger they get, and if all people involved in vaccination were part of a conspiracy, it would have burned itself out by now.

But can you believe a group of people I can count on my fingers might decide to tell big giant lies to keep themselves from getting in trouble? How about just ONE GUY? Would one guy try to get away with it, if for example, he had allowed bad policy, corporate influence, arrogance and flat out laziness to create THE most rampant epidemic of neurological damage in American history? Would that one guy try to lie and cover it up?

And do you believe that a top down profession like medicine, would simply believe that ONE GUY, if he was supposed to be the NATIONAL EXPERT entrusted with issuing stances on such matters that all those in medicine had to carry out, or be shoved out of the profession?

Frank is in charge of telling everyone in the country whether or not vaccines are linked to autism.

Here is what Frank tells us, and the whole wide world, on this critical matter on vaccine safety: 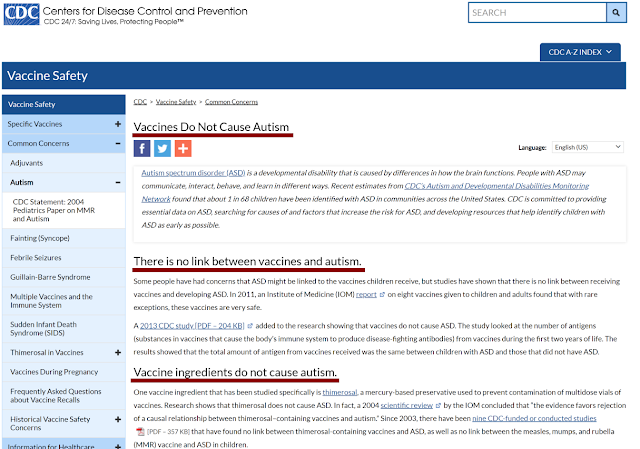 "Vaccines Do Not Cause Autism"

"There is no link between vaccines and autism."

"Vaccine ingredients do not cause autism."

But wait... here is what Frank told Sharyl Attkisson about that very same issue: 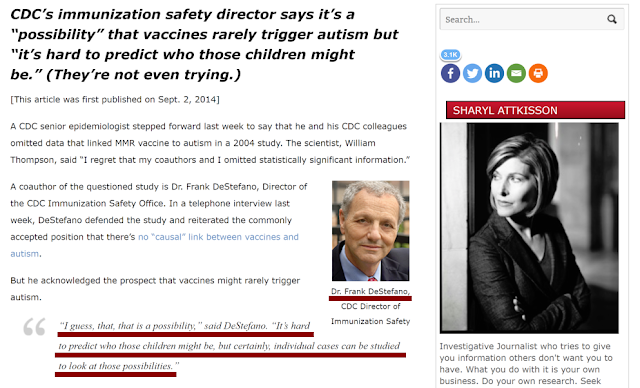 https://sharylattkisson.com/2015/01/25/cdc-possibility-that-vaccines-rarely-trigger-autism/
"He acknowledged the prospect that vaccines might rarely trigger autism."

“I guess, that, that is a possibility,” said DeStefano. “It’s hard to predict who those children might be, but certainly, individual cases can be studied to look at those possibilities.”


That is NOT AT ALL even remotely like what he said in is official position that ALL MEDICAL PROFESSIONALS IN THE COUNTRY HAVE TO RELY ON.

So why would Frank say that it is a possibility that vaccines can cause autism?

Because Frank already KNOWS that vaccines can cause autism. He found out in 1999 the first time he looked into it. 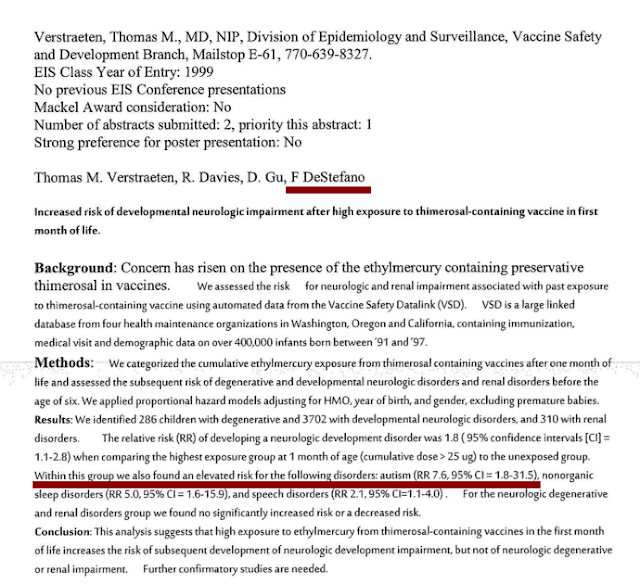 You see, Frank screwed up.

In 1988, when CDC began to jack up the number of vaccines from 23 given in the 70s and 80s, to the 70ish doses given now, they created the largest epidemic of life long neurological damage in US history. The autism rate went from 1 in 10,000ish to now 1 in 68ish (but probably really 1 in 36ish.  we can't get CDC to give us a straight answer.)

This started becoming apparent at the end of the 1990s, when one woman at the CDC issued a memo that said, "Hey guys... do you realize we have delivered truck loads of mercury into babies by giving them 8 vaccines at a time now?" Well clearly it was not a problem, because vaccines are the best thing ever and can't hurt anyone, but Frank's job was to look at that stuff, so he kinda had to look into it.

And that is when The Frank Squad found out that Team CDC was delivering 250 times the daily limit of mercury to babies, and babies getting the most mercury in their vaccines had a 600% higher chance of getting autism than babies getting no mercury.

Frank had a choice. Admit to what he had done, or lie.

He decided NOT to publish what he found, instead having his squad spend four years trying to unfind what they found. They couldn't. So they added on some garbage, published it, called it a "neutral study" and then a dude wrote a New York Times best selling book on the fraud. Which Frank, and everyone else at CDC, ignored. 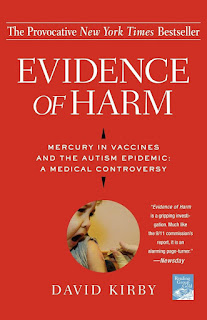 But they had to ignore it, because they had charted their course and could not turn back now!  Once you commit the first fraud, you have to keep on frauding or you are super busted.

Plus they had already published their second fraud. Because they had also looked into the idea that MMR was linked to autism, and found that IT WAS. In two different groups. One of the black males given the MMR under age 3. Of course they didn't publish that either, but literally held meetings with a garbage can in the room to throw out cases that they had to get rid of to make the research to fit the narrative.

Of course parents of MMR injured kids knew the paper was BS, but no one could prove it for 10 years, when one of Frank's boys admitted to Congress that they found the links and covered them up.

Which is why Frank FINALLY had to admit to Attkisson that it was in the realm possibility that vaccines can cause autism.

But he never bothered changing the CDC page emphatically claiming that vaccines don't cause autism.


Now for above referenced politicians, there is a LOT MORE ON ALL THIS. But I am going to stop here because it only gets more complicated.  But I have laid out so basics.  Do you see how, even from a 30,000 foot level, there is an obvious problem??

I ask you to consider this....

Yeah...  of course.... you can't keep a conspiracy quiet when millions are involved.

But when the leader of an organization, given total power over what US vaccine safety policy is, decides to lie and commit fraud, and everyone inside his organization has to live by his pronouncements, and in the medical profession has to work according to CDC pronouncements, you see how a very small conspiracy can come to rule the medical profession?

They become participants in the fraud, either knowing or unknowing... either willing or unwilling... but they HAVE to participate in the fraud in order to keep their jobs.  They have to tow the line, (so it is best no to look to closely at the issue, because what if parents are right?)

...without being involved in any conspiracy what so ever?

I appreciate you agreeing to meet with moms. If you could also invite Frank DeStefano to attend, so we can ask him direct questions on his work and conflicting public stances, it may clarify what is really happening in this very controversial issue very quickly.

Also, if you could invite a judge to swear him in, under oath, I think you will come to understand our complaints about the veracity and trustworthiness of vaccine safety claims with crystal clarity.

Bring a stenographer and a video camera.

This is not a vast conspiracy.  It is a small one, reinforced by those who need to believe it to keep their jobs, and those who refuse to listen to parents and investigate the charges that they make.

Because the reason that both have persisted decade after decade, is because you and people like you "refused" to take reports of injured children seriously.

Usually because it is such a monstrous thought that no one wants to entertain the possibility that it could be true.

But I can't get to Frank.  Frank does not talk to people like me.  Frank has security guards and laws that prevent me from forcing Frank to answer questions under oath.

And because you, unknowingly are running interference for Frank by dismissing Frank's massive fraud when parents like me report it to you, WE (you and I) end up having a problem.

But there is a line for everyone in this discussion, when dealing with super loud moms like me, that when crossed turns sincere ignorance on the fraud into willful ignorance.  Have you crossed that line yet?  If you are still willing to listen to moms, then probably not.  Be careful of crossing it.

Finally.... seriously... why are you letting Frank use you as a human shield?  Respectfully... you guys don't actually know what you are talking about on vaccine safety, and you are not actually responsible for the false claims Frank DeStefano Inc. are spitting out.  You didn't do the research.  You have not even read the research, much less understood the criticisms of it.  Why don't you just step out of the way and make FRANK answer for the fraud that he has perpetrated on the American public, and the world.

Stop protecting Frank DeStefano.  It is not your job.
Posted by Ginger Taylor at Saturday, September 01, 2018

OMG, Ginger, it's so great, and makes such telling points so well...eg. current Catholicism scandal and coverup.

Share it everywhere. My, "4 better prose," crotique--whatsoever can B a single word. :-)

Did every single medical provider, doctor, nurse, scientist conspire to cover up in the 1960s that the Polio vaccine had been tainted with a cancer causing monkey virus? Nope a few at the top made the choice to hide it from the American public and just had to tell their minions the same lie! Telling the truth would risk the entire US vaccine program so that took priority over human lives.

Did they all cover up the fact that Factor VIII, a blood product for hemophiliacs had been tainted with the AIDS virus? Nope, a few at the very top, decided to hide it from the public, hemophiliacs, doctors, etc. so the population wouldn't know that we have a serious issue with our blood program. Protecting the reputation of the blood program took precedence over human lives and tens of thousands of them were sacrificed in the cover up.

It has happened over and over again in our history. It is nothing new...in fact more business as usual where humans are sacrificed for the good of "THE PROGRAM"!