Marine Corps 1st Lt. C. Chandler Perine was my uncle and he loved me.

He died in the service of his country on November 15, 1970 at the age of 26 when the plane he was piloting suffered mechanical failure during take off from McGuire AFB, New Jersey

Chan, my father's younger brother, served as a helicopter pilot in Vietnam, a football player in college and "class flirt" in high school.

My youngest son, Chandler Perine Taylor, is named in his honor.

In October of 2003, while attending the Perine family burial plot for my grandfather's internment, Chandler, just 18 months old at the time, wandered away from me and our group, and walked straight to the grave of his name sake.  He lay down the truck he was playing with on Uncle Chan's headstone, and began to stroke the rose that had been laid there a few minutes earlier.

My sister followed him with her camera, and this is the picture she took. 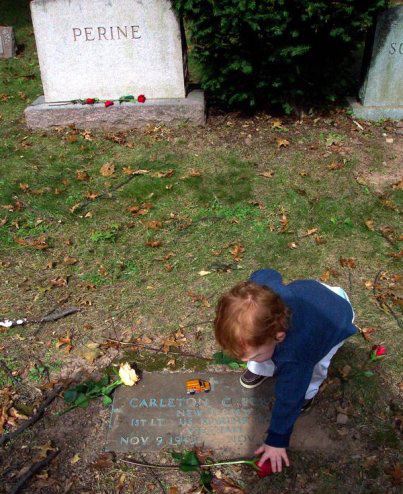 Wow what a beautiful moment. Children's hearts and spirits are so pure. He shared a moment with his great uncle. Amazing!