"Hey, get together tonight!" My friend reminded me.  I could barely hear her over my son's screaming.

Ugh, I thought.  I hadn't showered all day.  We just started a new regimen to help with our son's complex adrenal dysfunction and he'd been off all day.  By "off" I mean he hit me a total of 27 times (mostly open hand slaps with a sprinkling of fist poundings, always aiming for the face), we could not successfully redirect him from walking on the counters and touching the stove, and his general disposition was surly.  So, along with a paid helper, I'd spent my day thus far preparing his special food, trying to keep him from launching himself out the kitchen window, burning his toes and landing a left hook to my jaw.

"Uhm...yeah...I don't think it's gonna happen." I mumbled over his piercing screams. My husband looked at me quizzically.  I explained I had a meeting he didn't have to worry, I wasn't going to actually go.  A gesture of mercy ensued and he told me I needed to go. I had to get out even if it was just for a couple hours.  This is why I love this man.  Pure selflessness.  Autism (and a nation folding in on itself) teaches you this, if you let it.

After rushing through a shower I scooted out the door. On the way my mother phoned to tell me her best friend of 68 years died after her first in a series of several chemo treatments scheduled to treat her liver cancer. Broken words through sobs, "so unexpected...her poor grandbaby...she was going to fly in for a visit in June..."  We shared a good cry and I sat in silence the rest of the way.  Even when dense with sadness I've grown to appreciate silence like breath.
Upon arrival I was warmly welcomed along with several others toting wine and snacks.   Like veterans heading to the VFW for a fish fry there is no nervous anticipation, no anxiety, just the comfortable acceptance expected when one weathered soldier greets another.

I know, my friend. I know. It did happen. Come in and rest awhile.

Unlike most girls nights, ours spans culture, socioeconomic status, race and religion.  The discussion is cerebral but folksy.  We are at ease with one another and there is no small talk.  All of it, every word, is big and meaningful and the right combination may save a child's life.  I know I'm supposed to drink wine and relax but I always bring a notebook and a pen.  I don't want to miss anything.

No talk of Ashton's abandonment of Demi during her stint in rehab or rejuv or whatever it's called when celebrities can't cope with disappointment.  No yammering on about who wore what to the last big awards show.

Hey, can you help me with this porphryin test? What's the latest on your son's cerebral folate test? What did the muscle biopsy reveal? Do you think it's mitochondrial dysfunction that's causing the cerebral folate deficiency or is CFD a condition of mito disease in idiopathic autism?  Hey, did anyone read Eric London's chapter on the biopsychosocial model for autism treatment?  Groundbreaking!   How about that study on inflammatory cytokines compromising the integrity of the blood brain barrier?  Did anyone happen to bring a hard copy of the Kennedy Kreiger paper?

When the libations really start flowing we talk about doctors.  Mostly, their incompetence.  We talk about how we all saw our children decline, many of us saw a correlation to their vaccinations, and most of our physicians said we saw nothing.  They told us changing their diet was useless and that after months and months of prodding on our part, an evaluation by a government funded institution known as "early intervention" could point us in the right direction.   Of course, early intervention is where most of us get our first autism diagnosis disguised as "developmental delay".  A bunch of therapists come in and tell you they can't really tell you anything at all, except, your kid is delayed across the board in all categories and he needs therapy.  The doctors echo this sentiment. Our mainstream pediatricians and our government's evaluation facilities partner in the proliferation of the greatest ponzi scheme of our time, the ridiculous theory of Better Diagnosis. While they pat themselves on the back for "catching it early" us moms saw the damage a year ago but kept right on listening and vaccinating; thereby exacerbating our children's mitochondrial disease and wasting precious time that could have been spent treating all the metabolic and methylation issues our children's raped and weakened immune systems could not remedy on their own.

When one of my friends discovered her son exhibited several characteristics of the bowel disease that Andy Wakefield lost his license for discovering, she was told by her physician that she was mistaken.   How can a mother be mistaken about bowel obstructions, bowel disease, infected excrement and the resultant neurological illness she observes in her child?  Not only does she live it, but she's flown all over the country seeing the only research physicians capable of diagnosing it.  She has study after study test after test to PROVE his illness.  Her mainstream pediatrician and his remarkable ego told her she needed to "go to church" to figure out her problem.  She did.  She went to the church of higher thinking, the church of research physicians who listen to parents and treat real medical symptoms.  Then she came back to enlighten her doctor so he might help her child and countless other patients that suffer as her son does.  It was an act of good will on her part.

Go to church, he says.

We all have a good laugh at the expense of my friend's doctor and his "scientist friends".  Their remarkable egos.  Their thoughtless comments.  They are--well, they're idiots.  Puppets.  Fools.  Every last one of them.  And, criminals, really--when you think about it.  Every single doctor who refuses to listen to a parent after that parent reports a reaction to a vaccine needs to be held accountable.  It is my belief this will soon happen.  The thing about my mom friends and I is, we are very smart.  Our families, our babies, have been harmed.  Our precious innocent children. We are not going away.  We are women.  We talk...and talk, and talk and talk. But, we don't talk about Jenny, Andy Wakefield, or even mercury anymore.  We talk about macrophages, auto-immune-mediated tissue damage, IgG, IgA and IgM immunoglobulins in neuroglial cells.  We talk about disturbances in the homeostasis of the human body.  We talk about chronic illness in our children and it's iatrogenic causes.

We are amused by Nancy Snyderman, Marc Seigel, Paul Offit, Seth Mnookin and their tragic confederates who will be studied by Macolm Gladwell.  They'll  soon take their place in history along side executors of Christians and Holocaust denialists.  Once hailed as heroes, they will be mocked and disgraced for their arrogance and ignorance. It's not that we haven't tried!  Lord knows, we have tried! Representatives of the highest casts in autism research have done everything in their power to educate our doctors, our congress, the public. Their sage tutelage falls on the deaf but powerful and extravagantly perfumed ears of the Sadducees. If their science is too compelling, their case too strong, they are destroyed. Merck and their buddies descend upon our learned and honest researchers like a pack of wolves.  They take away licenses, destroy reputations, disembowel practices.  We, the moms, laugh.  Do you really think that is going to stop the truth?  Do you really think we don't see?  I tried explaining to my son that Dr. Wakefield's paper was fraudulent but it didn't stop his violent diarrhea and painful bowel disease as I'd hoped.  I also ordered him to stop having vaccine encephalopathy when my doctor said it couldn't happen because it was so "rare".  Gosh darn if his little head didn't swell even bigger.

Sometimes ya just can't teach stupid no matter how hard you try.  No matter.  The moms have arrived.  We are in every neighborhood.  And WE. are. taking. OVER. 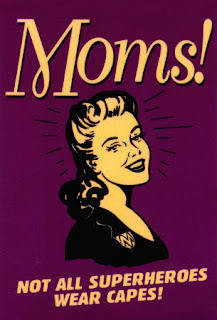 Email ThisBlogThis!Share to TwitterShare to FacebookShare to Pinterest
Labels: Age of Autism, autism

Amen. I breathe neuro-immune news now. I couldn't have said it better myself!

"Once hailed as heroes, they will be mocked and disgraced for their arrogance and ignorance."

..And jailed for their crimes. All of them, and I mean ALL of them, take dirty money.

Go to Church??? When our boy was younger I was told I needed to go get a little part time job! HA! I work for nothing at feet of Autism. Go to Church?? I worship at the feet of Autism! I have been asked...Have you prayed about it??? I pray so hard I call prayers my pleadings.I am so sorry that children continue to fall. We have been at this since our son regressed 16 years ago! Why are people still looking at us as if we have a problem?? Hold on LJ. It just has to get better.

ps...Happiest Happy Birthday Ginger! I still say you need to move that ~Donate~ icon to the top of the page.

Thank you Ginger. I miss LJG (and you and K Fuller, and others) now that I am not on FB.